Merging of Jangale Master in Baba

Laxman Gangaram Jangale popularly known as Jangale Master finally merged in Baba on 26th December 2006 after a long life of nearly 92 years. Perhaps he had the longest service at Meherabad.

He was born in an agriculturist's family in a small village of Jalgaon District on 15th June 1915 because of poverty he had to struggle hard in life. Even for basic education (up to matriculation) he had to stay in an orphanage at Ahmednagar for 7 years (1930-37) during the last year on closure of orphanage he shifted to Indore for final examination with the help of his well wishers. But he did not pass final examination and had to go back to his village. With reference to advertisement in the press in 1938 he was summoned by his well wisher for the service as a Bazaar Master at the Meherabad. As he had previous Experience of Marketing in the orphanage and had no other employment in hand he was keen to join the service but was late due to financial problem. Meher Baba made it clear that he could not be allowed to prosecute further education. He did not show inclination for further education and could derive extreme pleasure in doing work allotted by Baba. His service under Baba was not service in ordinary service but it was Baba's plan to draw him in his net as a reward to his simplicity, non offending nature and devotion that is why he never felt exhausted or tired even after working for whole day and involving himself at the instance of Baba in various errands of the villagers.

Due to family responsibility even though desirous, he could not accompany Baba in his new life, he was entrusted the duty of looking after families at Meherabad. After dropping of body by beloved Baba he rendered service at Samadhi up to the age of 85. He was fully satisfied in his life and all his family members namely three sons (Naresh, Suresh, Ramesh) and two daughters (Leela & Prabha) are well settled in life due to Baba's invisible nazar. His youngest son Ramesh in continuing legacy of his father to serve Meher Baba and presently in working as a trustee in Avatar Meher Baba P.P.C. Trust.

Amongst the mandali, Jangale master was an everyman a good natured, honest family man who served his lord and master faithfully till the end.

Laxman Jangle, known throughout the Baba world as Jangle Master * is no more (Jangle Master went to his Beloved on 26th December 2007).One of the world's truly great humble men, Jangle gave an account of his life that appears in the forthcoming book, Seekers of Love. Here is an excerpted and abbreviated version, with some inline comments in brackets.

"I came to Ahmednagar in 1930. In 1938 Baba advertised in the newspaper for a servant, and I took the post. Seven months after working for Him, I came to know, from reading various books, that He was a very important spiritual man. I thought that it was all right, so I spent my life with Baba. Eventually I understood that He was God.

"I worked for Baba for eleven years, until the New Life came. In that period, I did the marketing, sometimes with Vishnu's help. [They would go to the market in Ahmednagar and the surrounding villages to get the food, typically rice, dal, one vegetable, flour and oil for as many people as were being fed in the Ashram, up to many hundreds at the time of a sahavas.]

"I was married, and I was a poor man, but though Baba had no money, he was giving us money for our maintenance. I was conducting my whole family on that money.

"One humorous event happened about that time. For the marketing I obtained one tonga [horse-drawn cart]. There was one horse here, very fine, and Baba gave it to me, but told me not to use it to draw the tonga. But I made a big mistake and attached that horse to the tonga anyway. Vishnu Master used to help, and he and I went to the market in this tonga, pulled by this horse. On the way back from the market, we came to a bridge, and a military tank came the other way on the road. We lost control of the tonga, and fell into the river bed. Baba helped us because we could have been killed, but the river bed was very dirty and we had a nasty experience. That was my first and last mistake like this. It taught me literal obedience."

[To understand the extent of this story, it will help a westerner to understand that such rivers are used as the latrines by the villagers, so dirty is a bit of an understatement.]

"Baba also helped others in my family. My father wanted my elder sister to get married and Baba gave me Rs. 300 for her marriage. After one year, my father sent back the Rs. 300, and I tried to give it to Baba. Baba claimed that He had forgotten the incident and told me to keep the money with me. Eventually my Mrs. learned how to stitch clothes, so we bought a sewing machine with the money, and my Mrs. started a village clothing repair business, and we made enough money to get my oldest daughter married. [For westerners, there continues to be a dowry system in India, and to contract for a marriage requires a payment from wife's family to husband.]

"When Baba went out on the New Life, I had time on my hands, and started a business milking buffaloes. By Baba's order I was also looking after Kaikobad and his daughters.

"Baba used to come to my home. Sometimes Baba would say, 'The children are very strong. What are you feeding them?' Baba knows everything. Once a day, I was giving them rice and sometimes jowar [millet], which was very cheap at that time, and sometimes wheat. I told Him, 'By Your grace, they have very good health.' If anyone was sick, Baba used to provide some milk for that sick person. Dr. Nilkanth, Padri, Dr. Donkin was there, so my family used to receive medical treatment from His mandali, anytime.

"One time, after the New Life, I had a big accident on the road just near the Samadhi. It was my marketing day, and I had to ask Kaikobad's family what food they wanted me to bring. One truck was there, just as I was crossing the road, and it hit me. For four months I was in bed. If the truck had gone two feet more in my direction, I would have expired. Baba used to come to my home, looking to see that everything was right. One day when Baba was roaming in the village, he came to my house, and after arti and prayer he came here to rest. In that way, Baba helped me too much, and that grace Baba gave me permitted me to be carefree, just to work. Baba said, 'You have worked very sincerely.'

"When Baba died, up till then I was a servant -- up to 1969. But, in 1969 I found that Baba had put my name into the mandali as a beneficiary of the Trust, so now I am mandali. Baba said I was retired, because I had served for 30 years, just like a government official."

[Jangle Master did continue to work for the Trust, in spite of Baba's having retired him, at the order of the Trustees, but eventually only did Samadhi duty, and then retired completely. His parting words were:]

"Younger generation is hopeless. They don't know how to work. I exclude my sons, who are good, born here, and absorbed that atmosphere of Baba, and in that way I am very happy."

(Fotnote: pronounced Junglimaster, for those westerners reading this -- Jungl for the same reason as "mast" is pronounced "must". The nickname "Master" refers to schoolmaster, from the Hazrat Babajan school days, and he was also given that nickname though he had not served in the school) 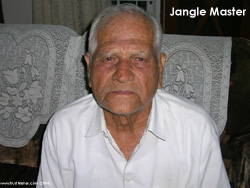 The last of the Meherabad men mandali, Laxman Jangle, fondly known to the Baba-world as "Jangle Master", went to his beloved Master, Avatar Meher Baba, on December 26th 2006 at 9 p.m., surrounded by his family in his home in Meherabad. He was 92 years old, and had completed 68 years of whole-hearted service to the Avatar. Jangle Master was cremated this morning, December 27th, at Meherabad, and his ashes will be interred in the men mandali's cemetery at lower Meherabad as ordered by Baba.

In 1938, Jangle answered an ad put into the local paper by Vishnu that called for a helper for Meherabad. He was immediately "hooked" by Beloved Baba, and never left. He served Baba in many capacities, doing marketing, odd jobs, and often holding down the fort at Meherabad when Pendu or Padri were called away by Baba for work elsewhere.

Like his Beloved Master, Jangle was also a great sport, as this following brief conversation demonstrates. Eruch reports that on the eve of the New Life, Baba told Jangle, "I am going away and cannot keep you. Shall I find employment for you? Where would you like to go?"

Jangle replied, "After serving You, Baba, how can I go anywhere else? We will stay here at Meherabad."

Baba said, "But you may starve here!"

Jangle answered, "Then that will be our good fortune, to die and be born again, and serve You."

Baba was highly pleased by this exchange.

Jangle and his family (who were all devoted to Baba) continued to live at the Meherabad Family Quarters through the New Life and afterwards, always under Baba's direct orders.

In 1959, Baba named Jangle one of the beneficiaries of the Avatar Meher Baba Trust ("Firstly").

After Baba dropped His body, Jangle went on helping Padri take care of the Meherabad estate and its old-time residents like Mansari, Goolu, Jalu, and Sushila. He also took a daily shift as attendant at Beloved Baba's Samadhi in turn with Nana Kher. Blessed with wonderful vitality and robust health, Jangle went on doing his duties well into his eighties, when various ailments finally slowed him down a little. Jangle's cheerfulness, integrity, forthrightness, and simple,  unwavering focus on Baba, were a standard and an inspiration to Baba-lovers as well as the Arangaon community. Till the end, he carried within him the clarity and fragrance of Baba's old-time Meherabad ashram. He will be greatly missed.

As Eruch would say, "He has won the race!"